kf_live_plot.py: reads in the output text files and live-plot the points

Kalman filter is mainly comprised of 2 steps: predict and update. Prediction is done based on the most recent state of the object, which is the bike in this simulation. For example, if a bike was at x = 0 m, and it was moving at 1 me/s speed, we can easily predict that the bike will be at x = 1 m after one second. Then, the system receives the measurement from sensors(LIDAR and RADAR in this project), integrate the measurement with the predicted state from the first step, and update the position of the bike. The system repeats these two steps and tracks the position and velocity of the bike.

This prediction for next state can be easily calculated with a simple matrix multiplication. For example, px' = px + dx*vx, and vx' = vx.

Here, we define the state transition matrix 'F', which was multiplied to the state matrix for prediction, as following:

This matrix can also be used for state covariance update. If you would like to know more about "covariance" or any mathematical proof for this, look up "Gaussian Distribution for Kalman Filter".

Now, we need to calculate the position of the bike based on the received sensor data. In this simulation, it is either a LIDAR data or a RADAR data.

This time, we received a LIDAR measurement (yellow x-mark), which seems to be very accurate given that it is almost right on the current position of the bike (big red dot). Since we received a measurement, we need to update the position, which is calculated based on the most recently predicted position(yellow dot) and the sensor measurement(yellow x-mark).

The updated position is shown with a green dot.

The reason we have different matrices for lidar and radar are because the measurement output for each sensor is different as discussed under "Simulation Setup" section. Following is the math done for calculation: 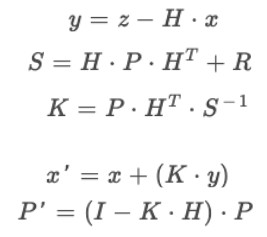 In order to figure out how accurate the system is working, I calculated the "Root Mean Square Error" for each time step. The equation of this error is: